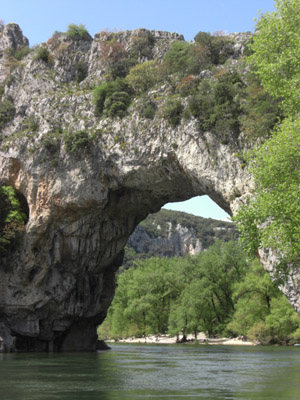 The gorges of Ardèche are an Ardèche place of interest.

Gorges, which form a real canyon of around thirty kilometers dug in the calcareous tray between Le Pont d’Arc (Vallon-Pont-d’Arc) and Saint-Martin-d’Ardèche, can be followed by car by the north side by a panoramic road through the scrubland. On their lower course, they form the border between the departments of Ardèche and the Gard.

Numerous belvederes, names of which are bound to the various sites were fitted out on the route, from the Serre de Tiourre embrassing the view over the Cévennes, towards Alès in the entrance of gorges, until Ranc Pointu, the panorama on Aiguèze, Saint-Martin-d’Ardèche and, far off, the plain of Rhône river and the mount Ventoux.


Our Gites and B&B Rooms